So, a week before Xmas my oven decided to stop working. None of the local shops can deliver a new one earlier than 6 weeks, and I have 7 for Christmas dinner… aarrrgghhh!

So what did I do? I turned to trusty Twitter and Facebook for an answer. After posting out my plea, I received back many ideas:

Yep, that’s right, cook it in the dishwasher.

Now, I admit that one of the other three options must be easier than the dishwasher suggestion, but come on – when have I backed down in the face of a challenge? The dishwasher it must be!

I told the family and they looked at me aghast. “Cook the turkey… in the dishwasher….?” All except Leigh, who said “What a great idea for a blog post!” (glad to see she inherited my nose for drama 😎 )

And so, on Xmas morning we duly got out the turkey: 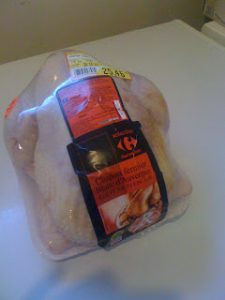 Well, to be honest it was a Chapon not a turkey as such, but it once had feathers and laid eggs so I’m not quibbling 👀

The recipes I found online said to wrap it in steaming bags – we didn’t have any so we extra quadruple wrapped it in thick turkey foil while we were running the dishwasher through on empty to make sure it was clean. 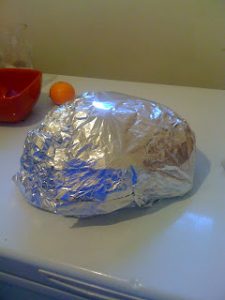 Then into the dishwasher it went: 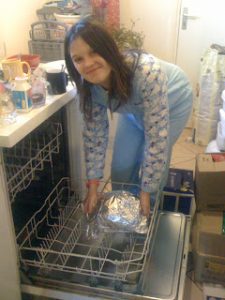 Here’s the turkey in it’s home for the next few hours: 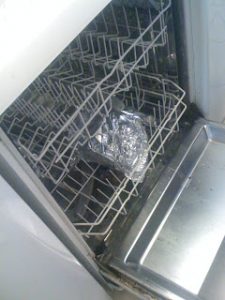 It was a 3.5KG bird, so we put it through 4 cycles at the highest temperature (75 deg) – checking it after each cycle to see if it really was cooking. Leigh was on standby with chicken nuggets if it didn’t, and my partner mentioned many times how glad he was having fish that could be cooked in the microwave (wuss!)

After 4 cycles, we unwrapped it and took a look: 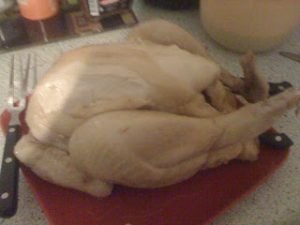 It was cooked! OK, it was a bit pale and anaemic looking, but nothing a quick blast in the microwave grill and copious amounts of gravy couldn’t sort out.

Most importantly, it tasted like turkey – moist, flavourful, and very definitely edible – with not a trace of detergent to be found 😎

The rest of the Christmas dinner was cooked in the halogen oven we borrowed, in pans and in the microwave, so it was a bit of a ‘take it as you find it’ affair, but all in all it worked well and everyone had a lovely Christmas dinner, as well as having created a bit of a talking point!

They tell me I’m brave to have tried it on such an important meal. There’s a thin line between bravery and stupidity; I’m not sure which side I’m on!

What would you have done with your Christmas turkey if your oven broke a few days before Christmas?

Archive post from 2010: More than 5 hours a week spent on Social Media Marketing?

We are all aware of the power of social media. Used by millions of adults all around the world,...